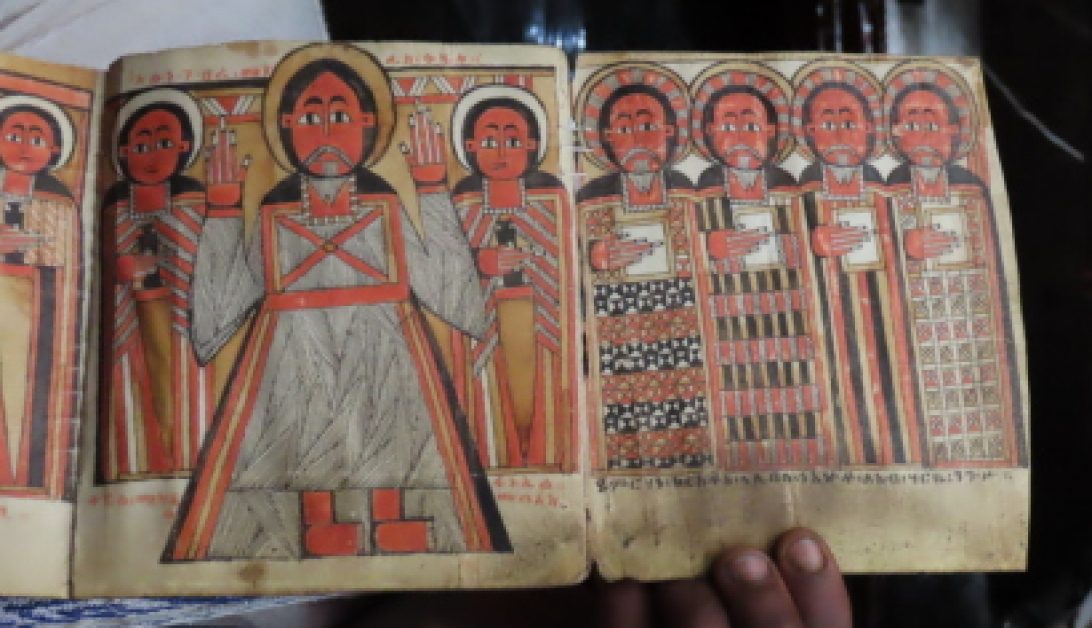 I’m so happy to be back in Cape Town, South Africa – this is my fourth visit, and I’m excited to have Craig meet my friends and see all the sights with me.  We’ve been here ten days so far, and here’s what we’ve been up to.

We’re staying in an Airbnb apartment in Zonnebloem, in the Cape Town City Bowl, right in the heart of things. We’re on the eighth floor, and although the place is very small and has a few flaws, I cannot fault the view.  Lion’s Head on one side, the city on the other, and Table Mountain from the roof.  We’ve been waiting for just the right day to take the cable car to the top of the mountain, but today isn’t it – there are gale force winds up there, and the park is closed.

We’ve been doing a lot of wandering around the city, going out every day for a little walk or coffee, maybe meeting up with friends for dinner and some music.  Here are some of the distinctive sights and people we’ve bumped into. 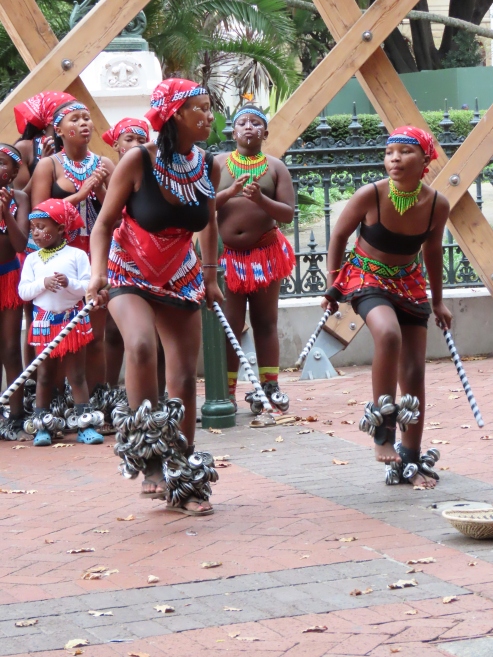 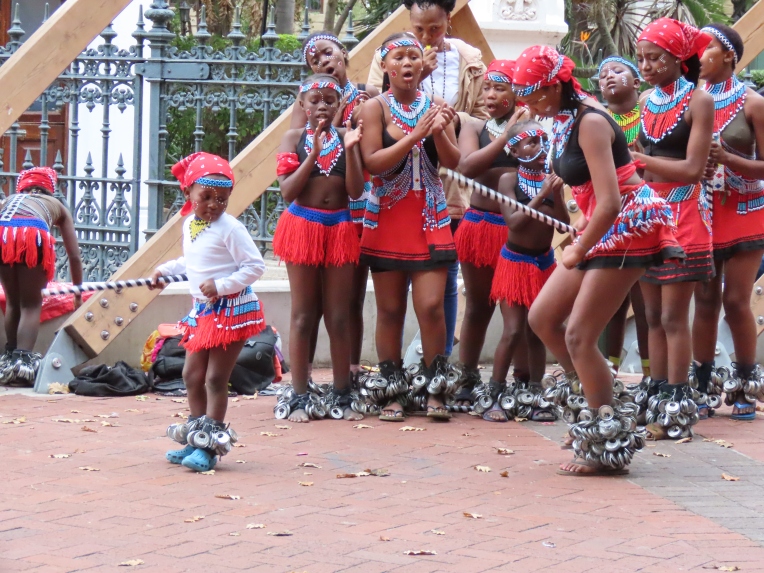 This performance troupe was busking at the entrance to The Company’s Garden, a lovely botanical garden that dates its beginning to 1644. Their outfits and beadwork identified them as Xhosa. The girls kept the rhythm along with the drummer by stomping their feet, and making their ankle bracelets rattle.  These were cleverly made of recycled aluminum cans. 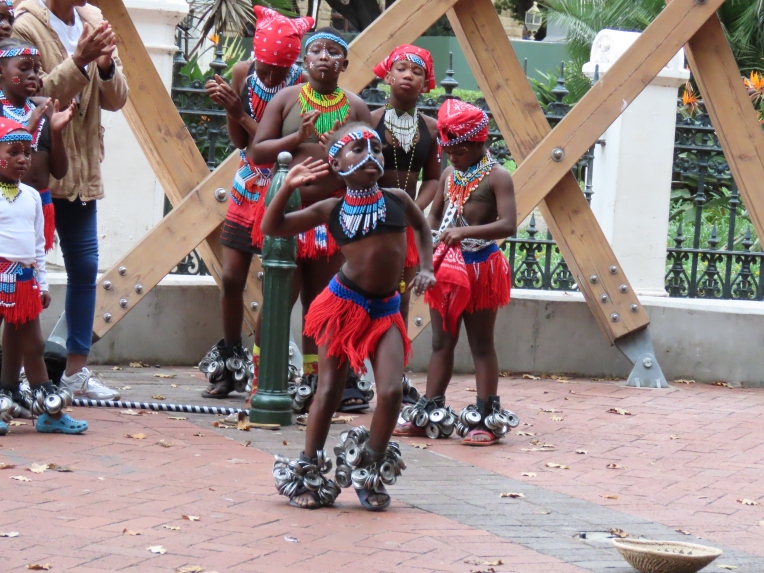 In St. George’s Mall, we came upon a piece of the Berlin Wall that was gifted to Nelson Mandela in 1996. The inscription below the wall describes in detail the situation in East Berlin prior to the removal of this barrier.  If you click on the photo it will enlarge so that you can read the plaque. 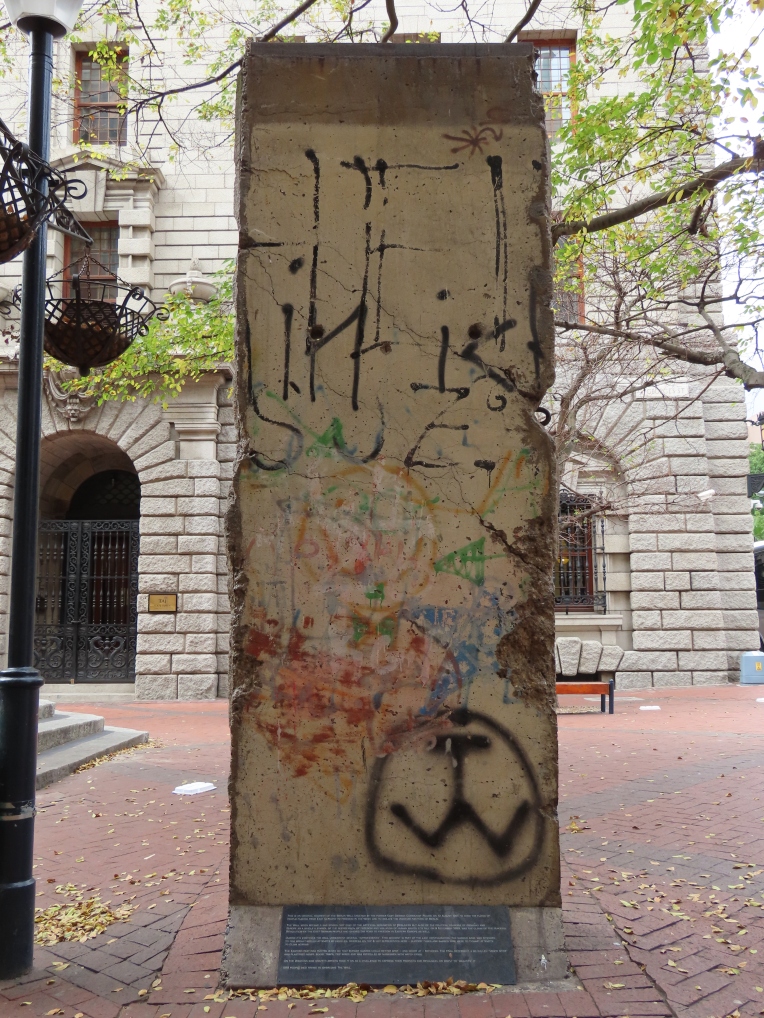 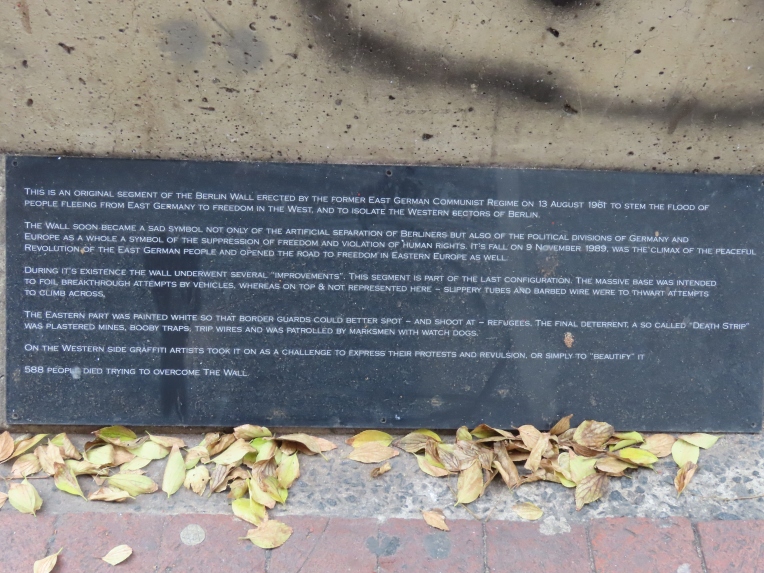 Here are photos of a couple of other interesting snippets of life in the City Bowl: a vintage arm-wrestling platform (the plaque shows very specific rules!), St. John’s Methodist Church, and some great street art. 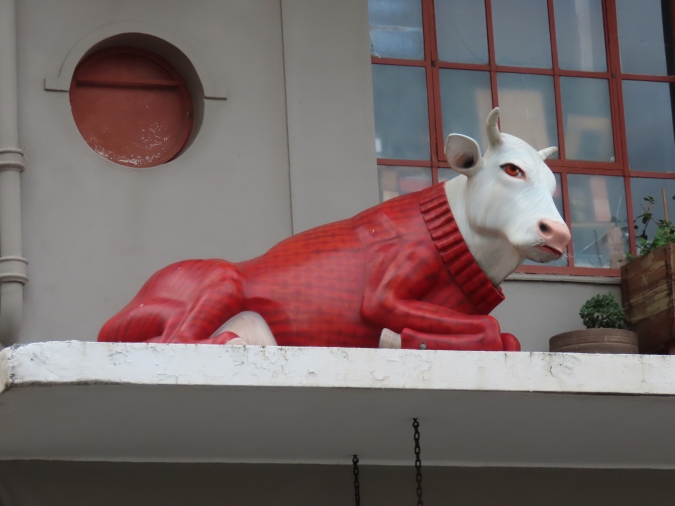 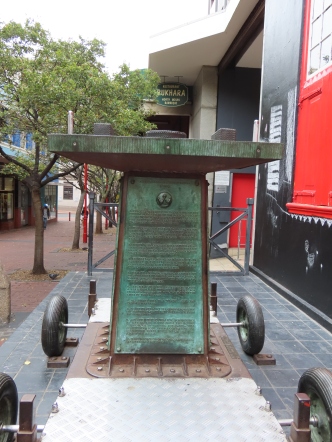 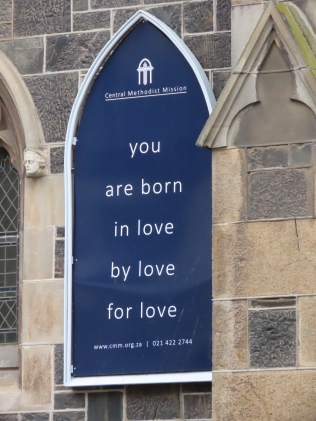 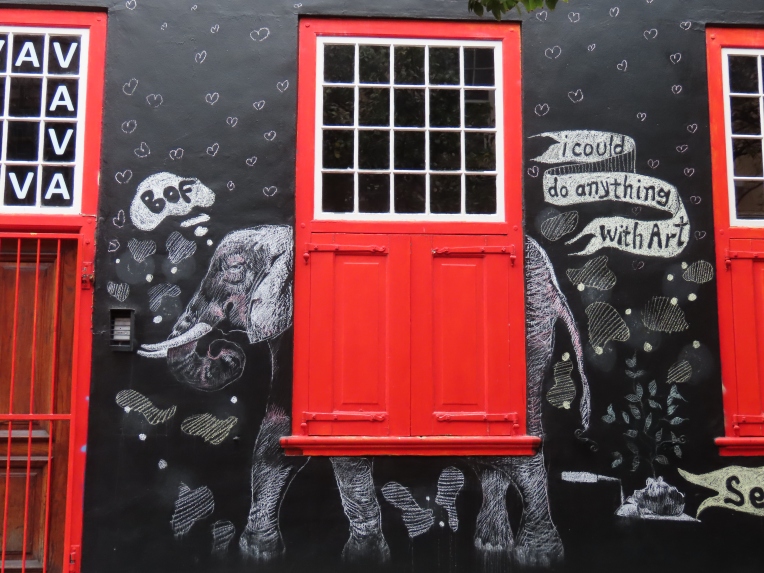 We took a day trip to Robben Island, the notorious holding spot of political prisoners who were arrested during the apartheid regime. (If you are unfamiliar with the history of this policy of institutionalized racism, click here for a brief description. It is important to be familiar with apartheid and its abolition, as this is a key piece of the current situation in SA.)

Robben Island is 4.3 miles off the coast, and less than 2 square miles. Nelson Mandela spent 18 years of a 27 year prison sentence on this island. Tours are conducted by former prisoners, when possible, or newly trained guides as the former prisoners age. Our guide on this day was jailed for 7 years, after being charged with terrorism, subversion and the like. He described to us the torture methods that were used during his interrogation, which I will spare you, and showed us a chart that itemized the food prisoners were given on a daily basis. This too was determined according to race, with Bantus, black people, receiving less than mixed race people. It is hard to comprehend the kind of intentional cruelty that went into every aspect of life on this island prison – indeed, toward all aspects of life in the whole country. Robben Island was closed in 1996, and has since been declared  a South African National Heritage Site as well as a UNESCO World Heritage Site. 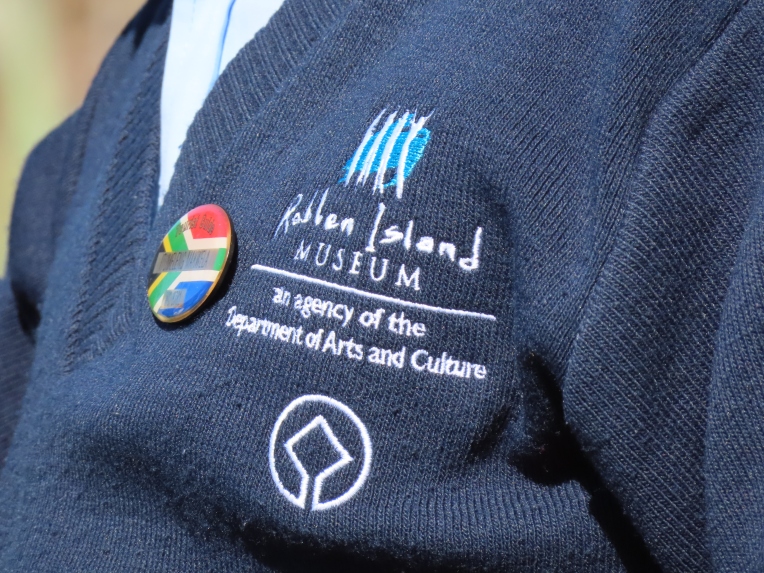 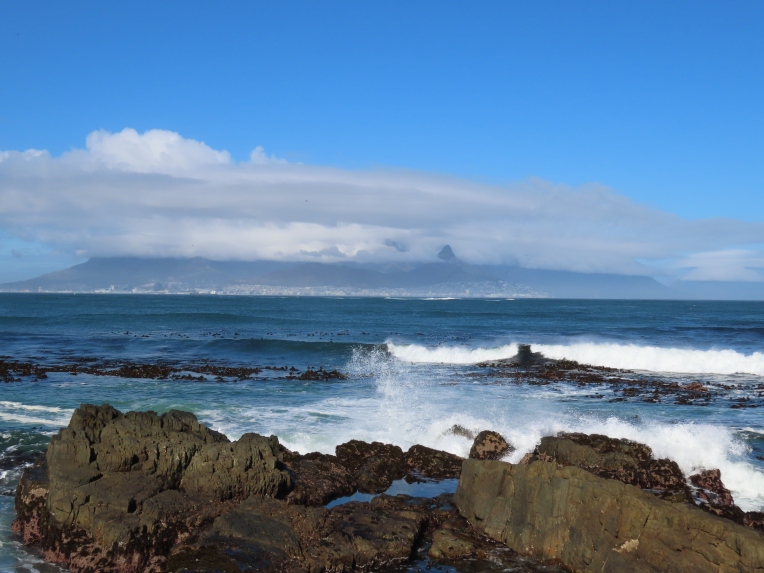 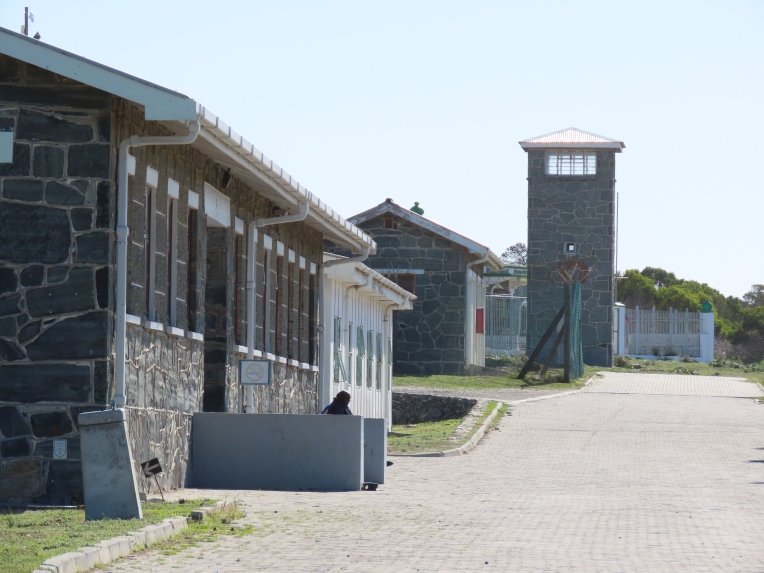 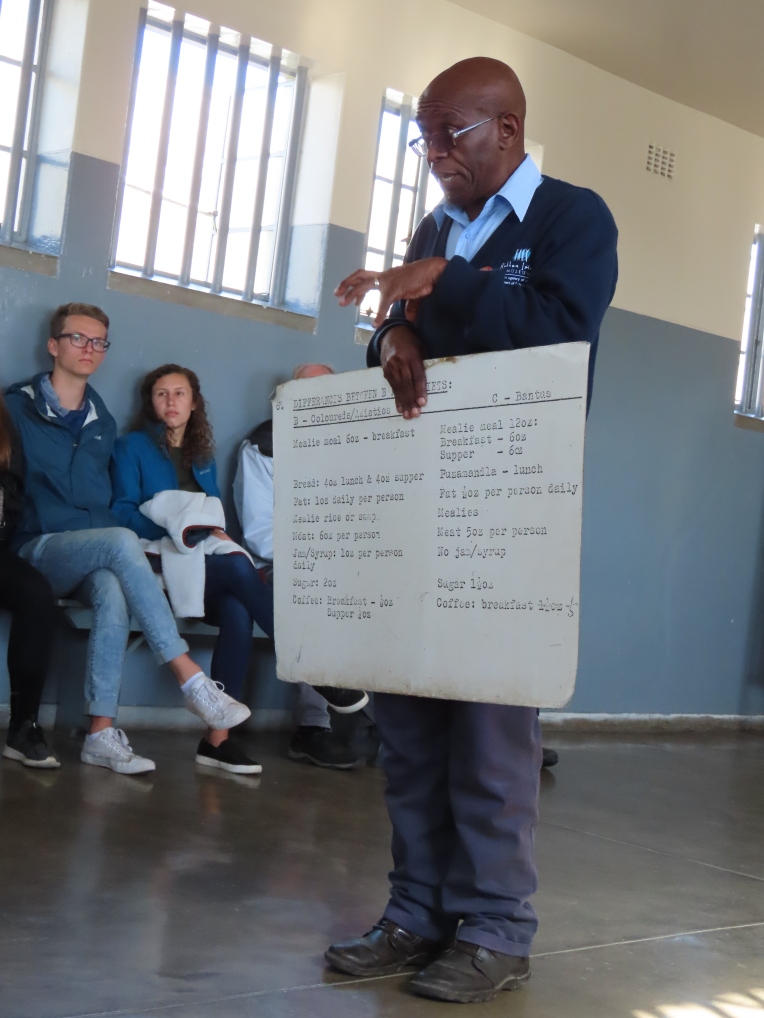 It was a relief to get back on the ferry and return to shore. The launch point for the tour is the Victoria & Albert Waterfront. When I first visited Cape Town in the 90’s, it was just a couple of shops and a few restaurants. Now it is a jumping place – loads of shopping, restaurants, art, a kiddie train, outdoor sculptures, street performers, and more.  It’s a fun place to spend an afternoon, especially on the off season, when it’s not too hot and crowded. 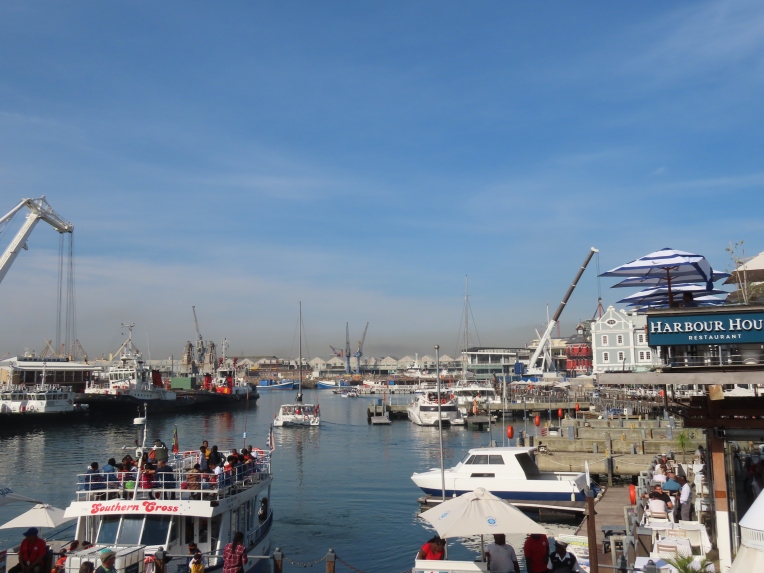 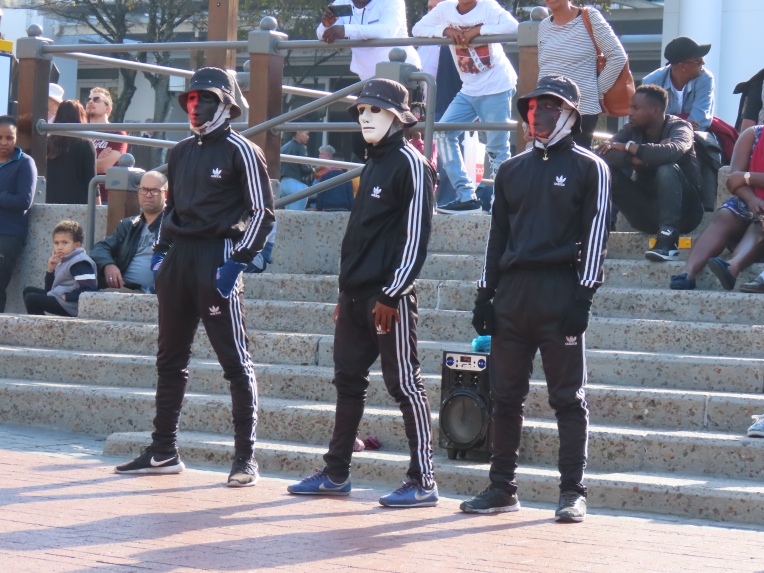 Right next to the waterfront is Oranjezicht City Farm Market, a foodie paradise.  We nibbled our way through the place, and brought home lots of goodies as well.  We were surprised to learn that the olives were grown locally. Plus flowers – so beautiful! 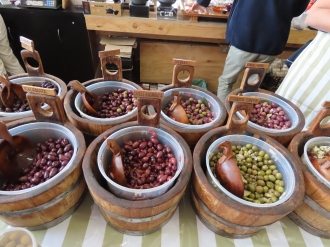 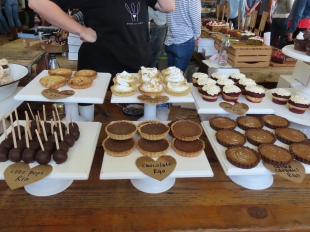 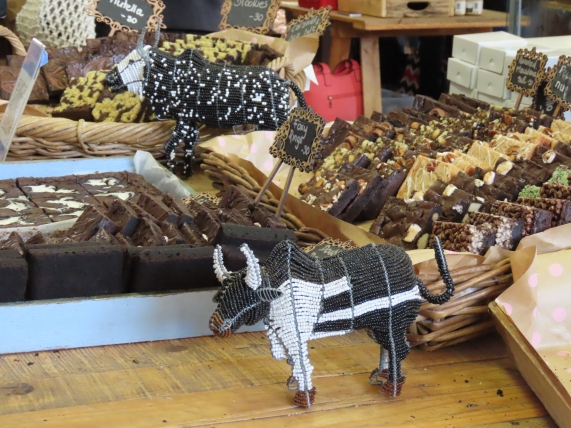 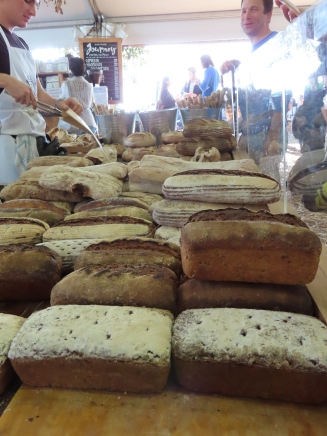 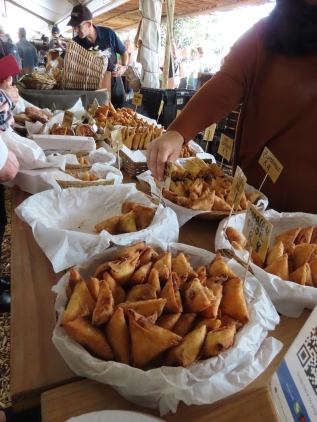 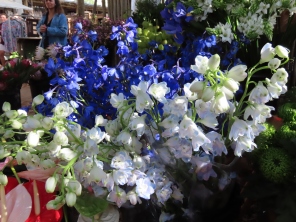 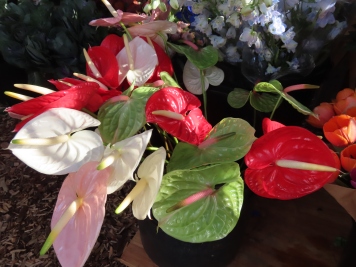 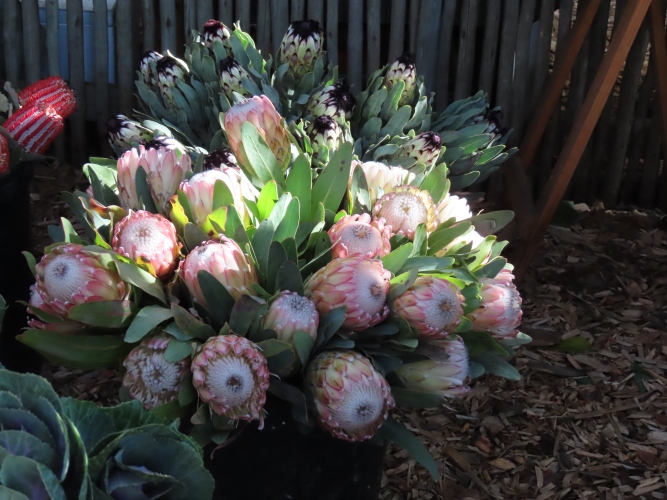 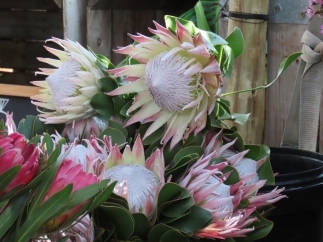 The beautiful protea is the national flower of South Africa

Thus far we have only been to one beach spot, to admire the sunset while waiting to meet a friend for dinner.  Sea Point has a nice pavilion with plenty of seating, which is great for watching the waves and birds. We were fascinated by the paragliders sailing above the beach.  Nope, not trying it! After sunset, we walked one block up hill from the beach to Mojo Market, which is a very fun place to get food and drink of any kind, plus there is live music several times a week. 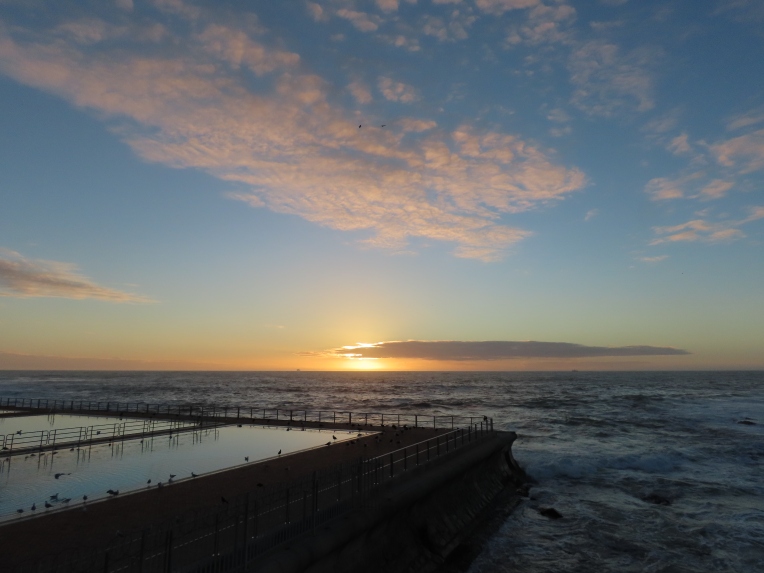 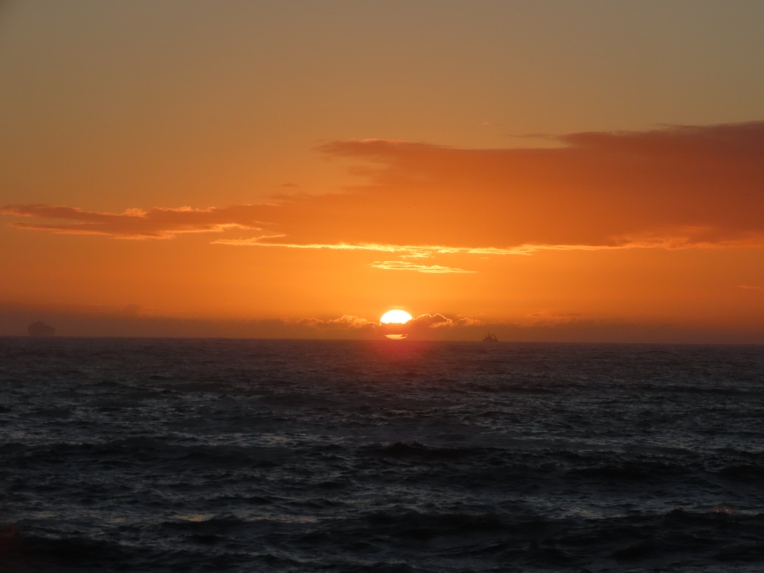 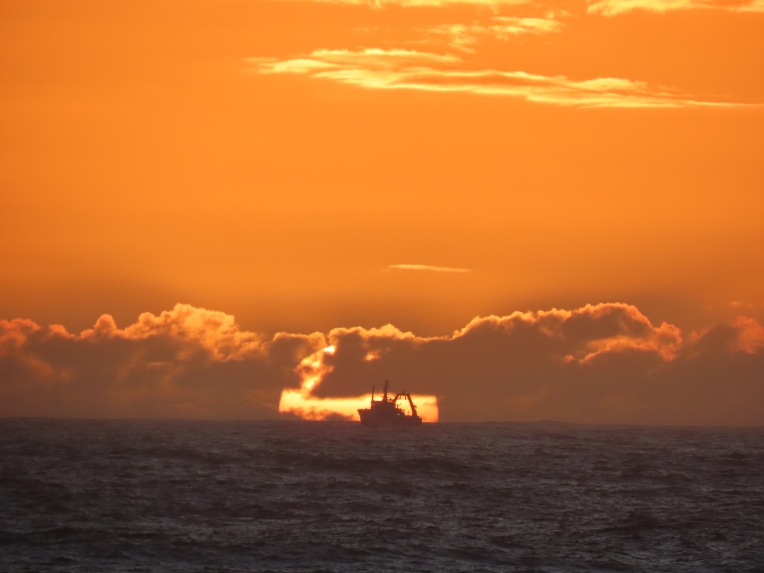 I’ll be back soon with more of beautiful Cape Town. Meanwhile, I’m going to go plan a safari!