This is not our typical blog post. Sorry, there are no safari animal photos today. But we had the most fantastic dinner last night, and wanted to write about it before your chance to eat there too is gone! 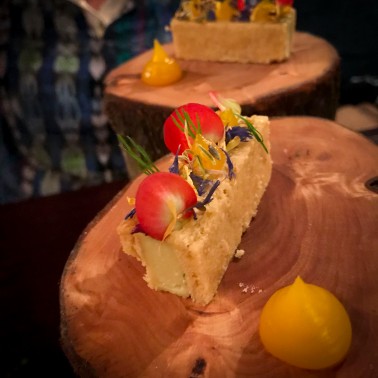 SŸN at 47 is a pop-up restaurant less than a month old, and in about another month it’s shutting down for a bit in order to establish itself permanently in a new location. But trust me, you don’t want to wait for the new spot. Finish reading this review, and then click the link to make your reservation. It’s a completely unique and engaging experience in molecular gastronomy!

The climb up to the third floor only wakes up your appetite for the evening ahead. One of the many things we loved about this dinner was the leisurely aspect of it: we were there for the evening, and were able to slowly enjoy every bite and sip.

Chefs Warwick King and Rikku Ó’Donnchü work on either side of the counter in a semi-open kitchen, and it’s great fun to watch them as they put the finishing touches on each plate. At some point in the evening even a helium tank appeared, but I’ll say no more about that. Some things are better encountered first-hand!

We opted for the dinner of 11 tastings plus wine pairings. As each course was presented, our very personable and knowledgeable waiter Rufus explained the inspiration behind the dish, and the characteristics of the accompanying wine.

No detail was ignored during our three-hour dinner. To begin, the menu items were printed on an edible sheet, which became a taco shell of sorts for part of the dessert. The good quality napkins were rolled into short stout cylinders for an unusual look to the table setting, and the appropriate silverware was brought out for each dish – small spoons, knife and fork, even a tweezer-like device for the seafood. The different tastes were served in a variety of vessels: eucalyptus wood platters, custom-designed ceramic cylinders that mimic ashtrays, tiny clay flowerpots. All of it charming and playful, all of it brilliant.

At first appearance, each serving seemed but a morsel of food. By the end of the experience, though, we realized that the amounts were just right. Anything more and we would have been over-satiated and uncomfortable.

I’m not even going to explain each of the plates. Just look at the photos of this gorgeous food, and make your reservations. https://synpopup.com/ 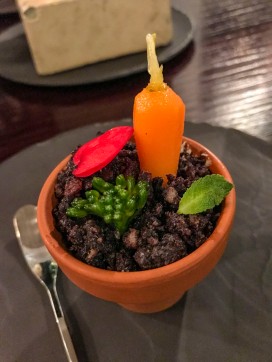 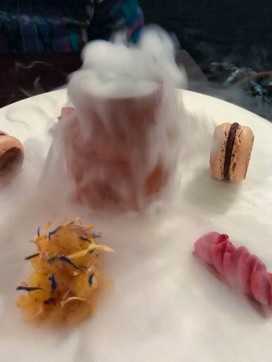 More beautiful animals from Schotia Safaris Private Game Reserve. If you are ever in South Africa, you must visit!

The crocodiles share a pond with the hippos, and neither seems particularly bothered by the other. In the first photos below, the croc in the rear is the female, and she prefers to spend her day with a pile of mud on her back.

Personally, I find the crocs quite sinister looking.

The Schotia Game Reserve – approximately 50 kilometres outside Port Elizabeth – reported today on the poaching of two rhino on the reserve.  It is not clear when the poaching occurred as both animals could not be located for more than a day leading up to their being located, late yesterday afternoon of the 30 May.

The bull, known as Clyde, was discovered first, heavily drugged and in a state of shock. An initial search for Bonnie, the female, proved fruitless and it was feared that she would be found dead.

Schotia immediately called for the veterinary assistance of Dr William Fowlds, of Investec Rhino Lifeline, who arrived supported by the helicopter services of Grant Soule of Aptrac. A short while later Bonnie, was found, very dazed in thick bush.

Both rhino were treated by Dr Fowlds and we can report that they have survived the night and have been located alive this morning.

Dr Fowlds said, “Both these rhino are extremely fortunate to be alive. It is suspected that they were darted by the poachers. Treatment of their damaged horn bases is expected to be successful but what is uncertain at this stage is how much internal trauma they have sustained due to the extended period they would have lain under potent anesthetic drugs. In previous cases this has led to death weeks and sometimes months later.  Both rhino have some trauma to their eyes which is being monitored. Blood samples have been sent to Cape Town in an effort to assess the degree of internal complications.”

The aftermath of this poaching event was that both rhinos are now sterile due to internal bleeding. Furthermore, Bonnie was pregnant at the time, but lost her baby. Thus, poaching has eliminated the possibility of an increase in the rhino population at Schotia Reserve.

Poaching has embraced technology, and the thieves now use GPS tracking and helicopters. They have also been known to pose as guests on safari drives, to scope out the possibilities at any given location.

Due to the prevalence of poaching, and the sophisticated methods used by the poachers, the owners of the reserve have asked that I not publish any photos of the rhinos to social media. Although I am disappointed to be unable to share the photos with you, I am of course honoring their request. I wish I could do more to help prevent this horrific criminal activity, which is unfortunately so lucrative and widespread.

And yes, here in Cape Town you can get pasta shaped like safari animals. And yes, I do have a package in my suitcase to take home for my grandson.

Yes, that is the plural form in English. You Latin-speaking purists may go with hippopotami. Either way, I find these fellows bizarre and amusing. I would even go so far as to say they have a malevolent look in their eye, and I certainly did not get anywhere close to them (thank you, Canon telephoto lens.)

Hippos spend most of their line hanging out in the water, immersed up to their eyeballs. They can hold their breath for five minutes or longer when they choose to dunk under. And they are not the least bit threatened by the crocodiles sharing their pool, nor the reverse. Strange bedfellows indeed.

For as slow and lumbering as they appear on land, the hippos are right quick in the water. I completely missed the shot of one rolling over – my pics show nothing but foamy water. The blurry pic below is the best of the lot of a gigantic hippo yawn, and I included it because, well, take a look! 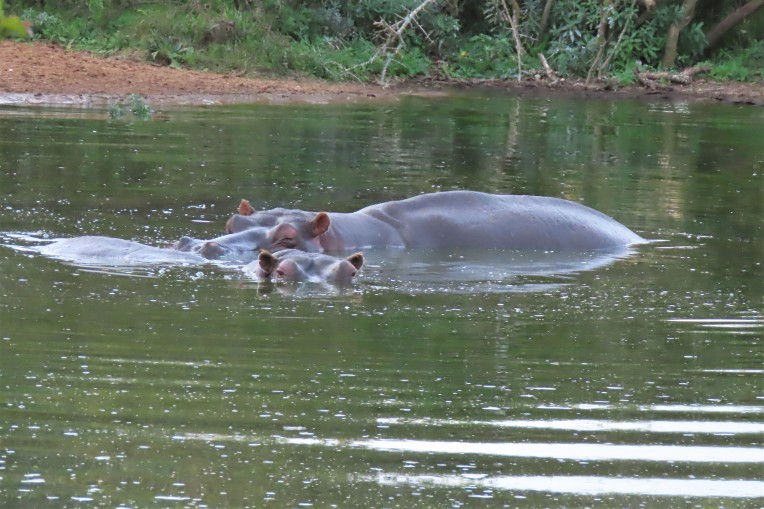 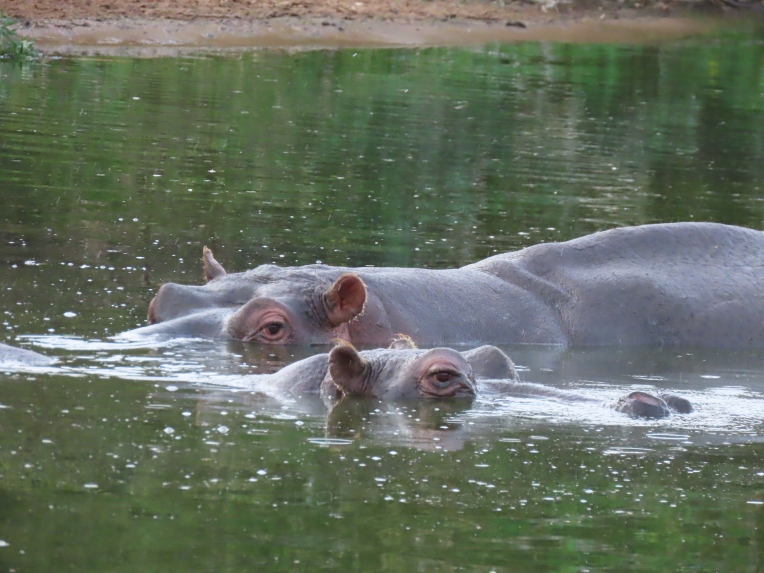 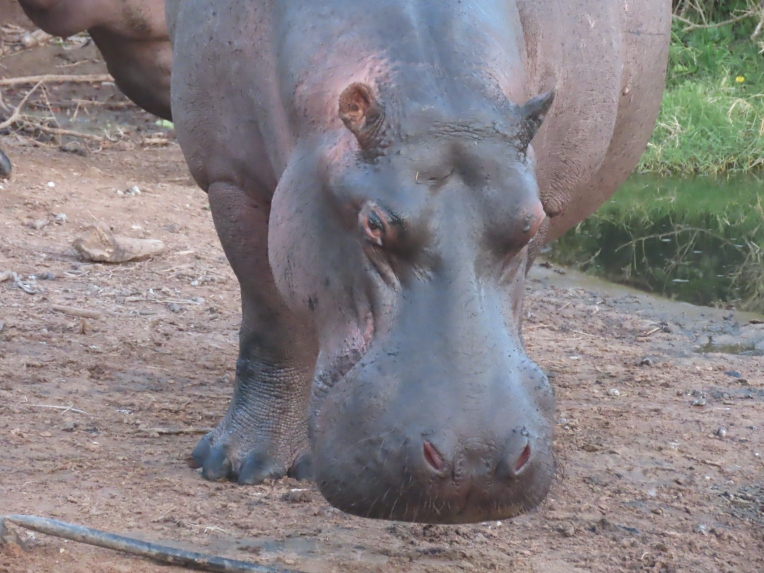 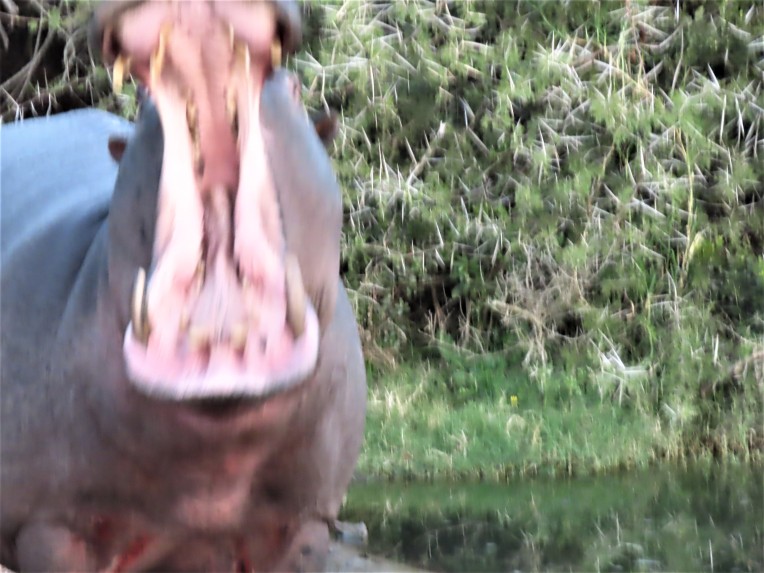 I hope you’re not getting bored with my animal blog posts, because I’ve got two more. So keep an eye peeled to my Facebook page, or better yet, sign up on this site to follow me.  You’ll  make my day!

Maybe not quite as cute as Pumbaa in the Lion King… 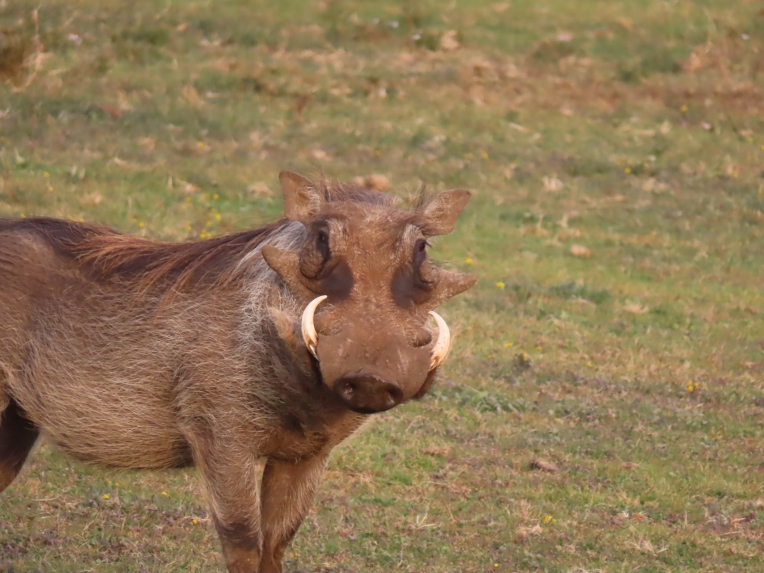 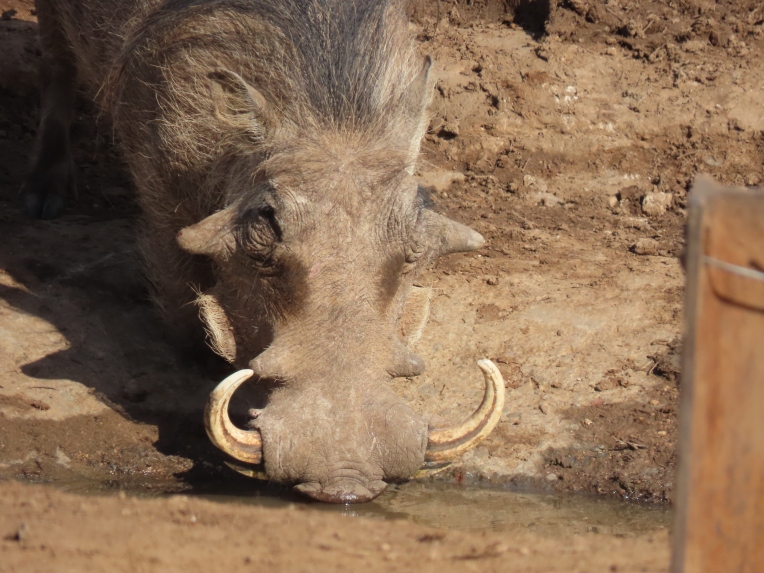 This term refers to a number of deer-like animals that we saw on the game drives. Their characteristics are smooth hair, and upward-pointing horns. We learned that the horns that these animals bear are not antlers; antlers are shed and regrown seasonally, whereas horns are permanent and have blood vessels, which means they bleed when they break.

Tracking the giraffes is fun and really easy, for obvious reasons. Our guide told us that the pattern on their hides is as individual as our fiingerprints. I love the way their fur looks reddish in the sunlight. 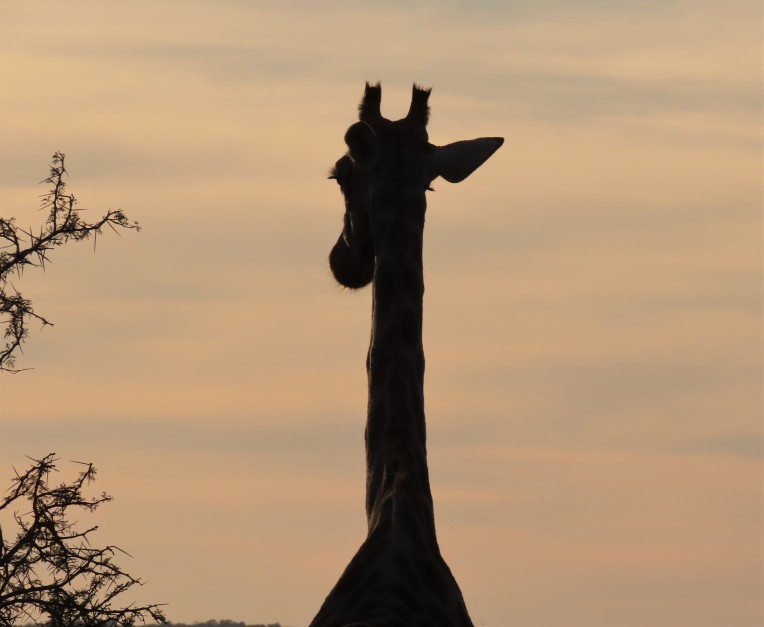 Thanks for reading! I’ve got so many animal photos that there will be two more parts to this blog entry. Please sign up to follow me, and you’ll get notified when they launch. I appreciate your time!