A highlight of our time in South Africa was our road trip east, along the Garden Route, capped off by 3 days at a game reserve. We decided on Schotia Safaris Private Game Reserve, a beautiful family-owned expanse of wild land and the animals who live there.

We stayed in a lovely thatched roof lodge, very spacious and comfortable, which was luxurious and  rustic at the same time. Although there was electricity, there was exactly one light fixture; the rest of the light was provided by oil lamps and candles, which made for a wonderful evening. On the other end of the spectrum, the bathroom was one of the most elegant we have seen in our travels, with a walk-in shower as well as a large tub. (Ironically, South Africa is in the midst of a drought, and guilt prevented us from taking advantage of the many deep soaking tubs in our hotels.) We hadn’t realized that we would be the only overnight guests at the nearly 4,000 acre property on our last night – we felt like the kings of the castle! 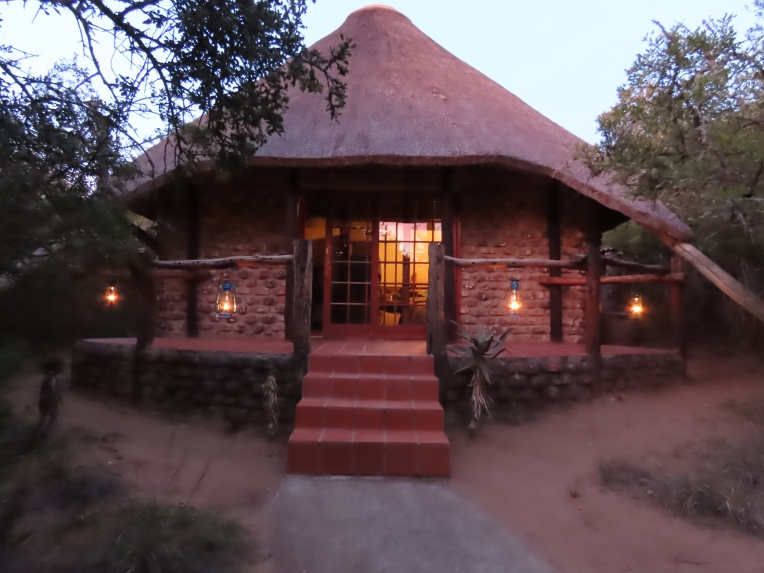 I could try to describe the beauty of the place, and the stunning wildlife, but it’s much better to simply get to the pictures, isn’t it? Here they are.

The elephants at Schotia are stunningly beautiful and healthy. Here is the first one we met, ambling down the road to take a look at the visitors.

Our guide Edward referred to this fellow as the Boss, for obvious reasons.  Edward reassured us that he was a very calm elephant and there was nothing to fear, but as he came within a few feet of us sitting in our open truck, I had a sense of his enormity and power, and sincerely hoped Edward was correct in his assessment of the fellow’s peaceful nature.

He hung out with us for a bit, munching grass. He would scrape at the grass with his front foot, pull some out with his trunk, and then tap it against himself to knock off the dirt before popping it into his mouth.

After a bit, he circled around the truck and ambled off. It took a while before my blood pressure returned to normal.

We also visited the nearby Addo Elephant Park, which is part of South Africa’s impressive system of national parks.  Although there is a larger herd (currently 750 elephants, which originated from a herd of 18) at Addo, many of the elephants have undersized or no tusks at all, due to the relatively small gene pool in this isolated community. It was enthralling to watch the herd gather at the watering hole for a drink. 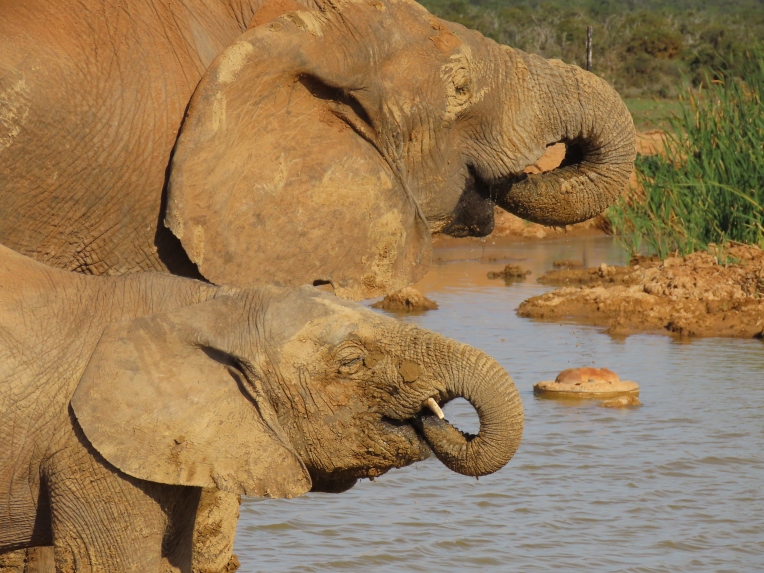 The babies! Just so adorable!

As I mentioned, in Schotia we were not constantly bumping into other groups; not so in Addo.  As we watched the elephants drink, we had to jockey for position with at least a dozen other vehicles. An animal sighting would cause a traffic jam as everyone tried to get a good view from their cars.  (Under no circumstances are visitors allowed out of their cars at either reserve. They’re cute, but they’re wild animals!)

Back at Schotia, one morning we discovered a large branch of an acacia tree blocking the road. Edward told us this was the work of the elephants, who regularly knock over trees for a variety of reasons. As a brilliant means of natural elephant repellent, the Schotia folks placed bee hives around the trees, because elephants are afraid of them. Ridiculous, right? But apparently effective. 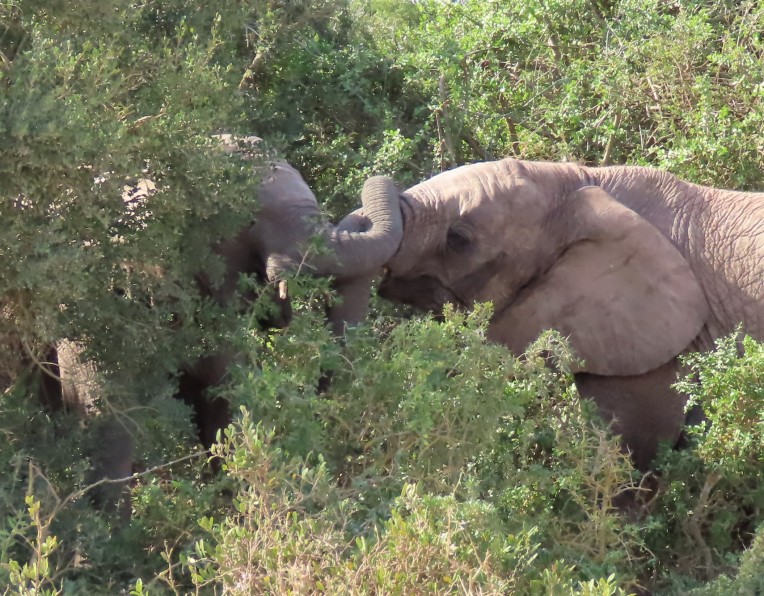 On one of our game drives, we passed the carcass of an elephant.  A couple of years ago, this elephant was constantly breaking out of the reserve, and was teaching the other elephants these bad habits as well.  This is dangerous for the neighbors, and ruins crops on their farms. Sadly, the elephant had to be killed. The body was left so that the carcass could provide food for other animals as it decomposed.

I didn’t take this picture intentionally, but I decided to include it here because this is how Craig and I spent our days. Our guide probably wouldn’t recognize us without out cameras against our faces.  We each took thousands of photos in just a few days – thank goodness for digital photography!

Another real highlight of our time at Schotia was seeing the lions.  There is an older male lion, and his two children, male and female. The first evening we spent at the reserve, we heard them roaring in the distance – it was exhilarating to hear! (The reserve is divided into a couple of very large sections, and there is no chance of the predatory animals reaching the guest housing.)

The lioness had a successful hunt one evening while we were there. All of them had a big meal, and then didn’t want to move the next morning!

I got a real kick out of watching the warthogs.  They are such comical looking animals! There were loads of them at Schotia, and they mingled in with most of the other animals. I really don’t see how they manage to close their mouths, with those tusks sticking out! 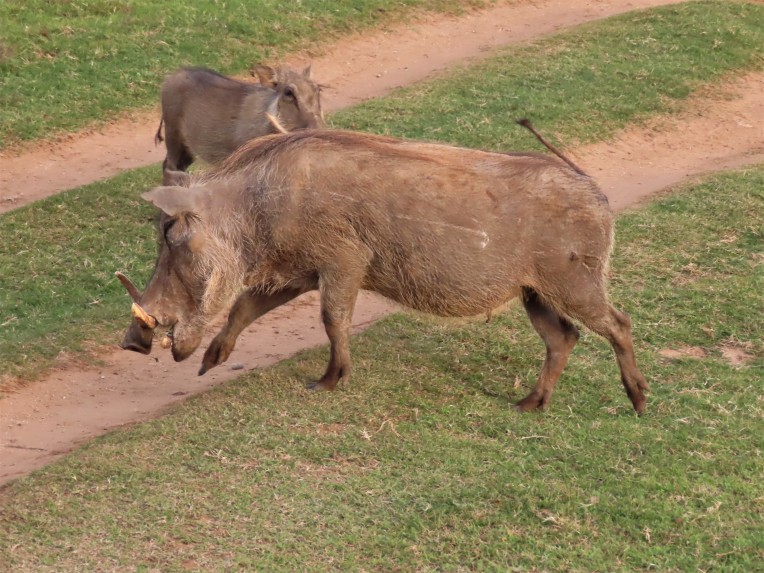 I’m going to sign off for now, and I’ll come back soon with more animals: hippos, giraffes, and antelope. Here’s one last picture for today:

2 thoughts on “Adventures with the Animals: Part One”