It has been one full month since Craig and I locked the pod and hopped into the rental car.  Our travels have taken us down the East Coast, and we’ve had the pleasure of visiting friends and family along the way. Today I feel like the real trip is beginning – we are on the runway of Jacksonville International Airport, enroute to Quito, Ecuador.

Here’s a quick recap of our adventures thus far.

Our first week was spent relaxing at the home of my junior high school friend Janet and family, but they were absentee hosts since they were in Ireland! It was a great week spent relaxing, and some of our kids were able to join us for a few days. It was blistering hot, so we didn’t spend much time on the beach, but I was very entertained by feeding the giant snapping turtles who lived in the lake at the back of the property.  Scary looking, isn’t he?  I spent a considerable part of my childhood catching turtles, snakes and frogs with my brother, so I have an affinity toward snappers.  We learned this one was named George.

Kinda looks like the Loch Ness Monster, doesn’t he?

If you’ve ever tried it, you know it’s nearly impossible to get a good picture of fireworks on the Fourth of July, so here’s a picture of my cute grandson instead, saying “Cheese!” with his favorite Hauntie (that’s what’s he’s called her since he learned to speak, and we all just love it.)

I admit it was a somewhat tearful good-bye, at least on my part, as we headed in opposite directions.

Next stop: Rockville, MD, home of our friends Kent and Sue, and our little buddy Peanut the Cocker Spaniel. Our hosts couldn’t have been more gracious, and we had a lovely time.  Sue took us into DC on the Metro, and we spent a wonderful afternoon in the portrait gallery. Yes, we saw Barak too. Take a close look at the picture of the license plates in order to get the message the artist wished to reinforce. 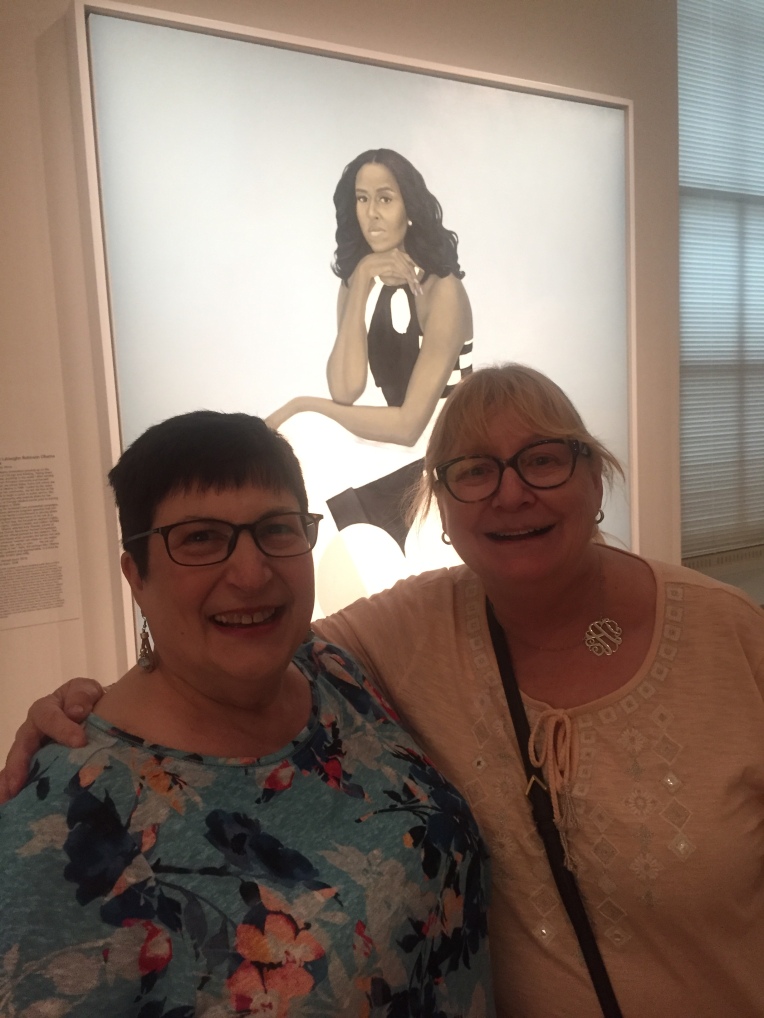 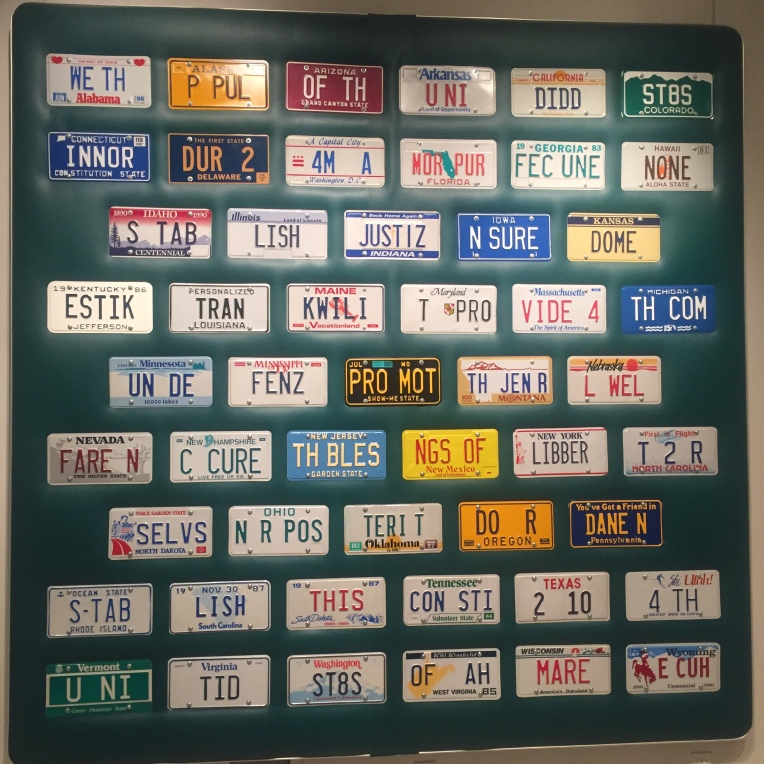 We took the scenic route from VA to WV, and traveled the Blue Ridge Parkway. Stunning views and sometimes wild curves, but well worth the extra time and effort.

Parkersburg, WV, is a little gem of a town near the Ohio border, with beautiful Victorian homes and lots of nearby attractions.  But the best thing about the place is the fact that our dear friends Cheryl and George live there.  We haven’t seen each other in nearly 5 years, so it was a great reunion. 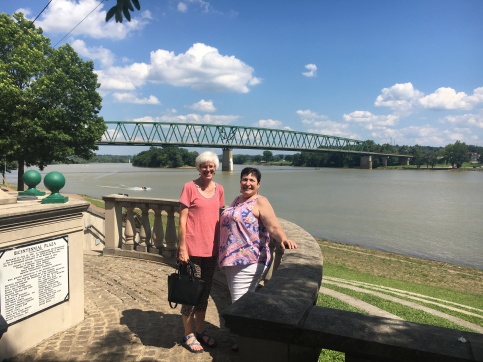 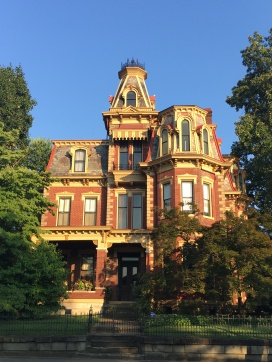 Next a fun visit with Bobby and Samantha, in their new condo in Charlottesville, VA. It’s so nice to see our children successful and happy. They were wonderful hosts, and showed us a great time in a lovely city.  Uncle Bobby was a good sport about sending an Elmo hello to Andrew – more about that another time.

For something completely different, we headed to Simpsonville, SC, to the lovely new home of Lynn and Mike Murphy.  For those who are unfamiliar with the names, Mike is the senior pastor at Doylestown United Methodist Church, and my former boss as of 4 weeks ago.  Lynn greeted us upon our arrival, and then needed to leave early the next morning in order to serve at – what else? – VBS.  Craig and I spent a peaceful two days in the area, wandering around Greenville and enjoying the beautifully landscaped parks.  But y’all, it was weird staying in my boss’s house, especially when he wasn’t there!

We had a joyous reunion with our dear friends Maryann and Bob in St. Marys, Georgia. Mare and I have known each other since 1992, through the ups and downs of divorce, moving, remarriage, ordination, moving, retiring, moving again, dealing with kids and stepkids and grandchildren.  I’m happy to report she hasn’t lost her wacky sense of humor through it all.

If you follow me at all on Facebook, you know I am strongly in favor of sensible gun laws and that’s as political as I’m going to get right now.  Bob drinks his morning coffee in a MAGA mug.  Enough said? We respectfully disagree with one another. Bob is a member of a local gun club, and we all decided to go target shooting one day.  I think he invited me as a kinda dare, so of course I had to take him up on it. It was loads of fun, even if it was hot as Hades.  Bob has quite an array of firearms, and is a knowledgeable and patient teacher.  When he set up the AR 15, you know I had to try it, right? It was actually a lot of fun, and not as scary as I thought it would be. (I admit that on the ride to the club, I was terrified.) I completely understand the desire to own and use guns recreationally. Pointed at a paper target. Amen. 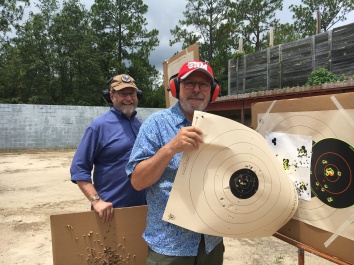 It was tough to say goodbye to the Meadors, but we were on a tight schedule. We continued south to our last destination in the states: Holly Hill, FL. Donna and Jeff Strauss live in a stunning apartment on the 25th floor, overlooking the Halifax River and the Atlantic Ocean. We were once again blessed by gracious hospitality and the insider’s view of what to see and do in the Daytona Beach area. Plus, they have recently acquired the cutest little Pom puppy!  Sophie was an irresistible ambassador.

We had such a lovely week, enjoying the sun and sea, eating seafood, visiting NASA, boating on the Intercoastal Waterway, and just enjoying a relaxing time in good company. 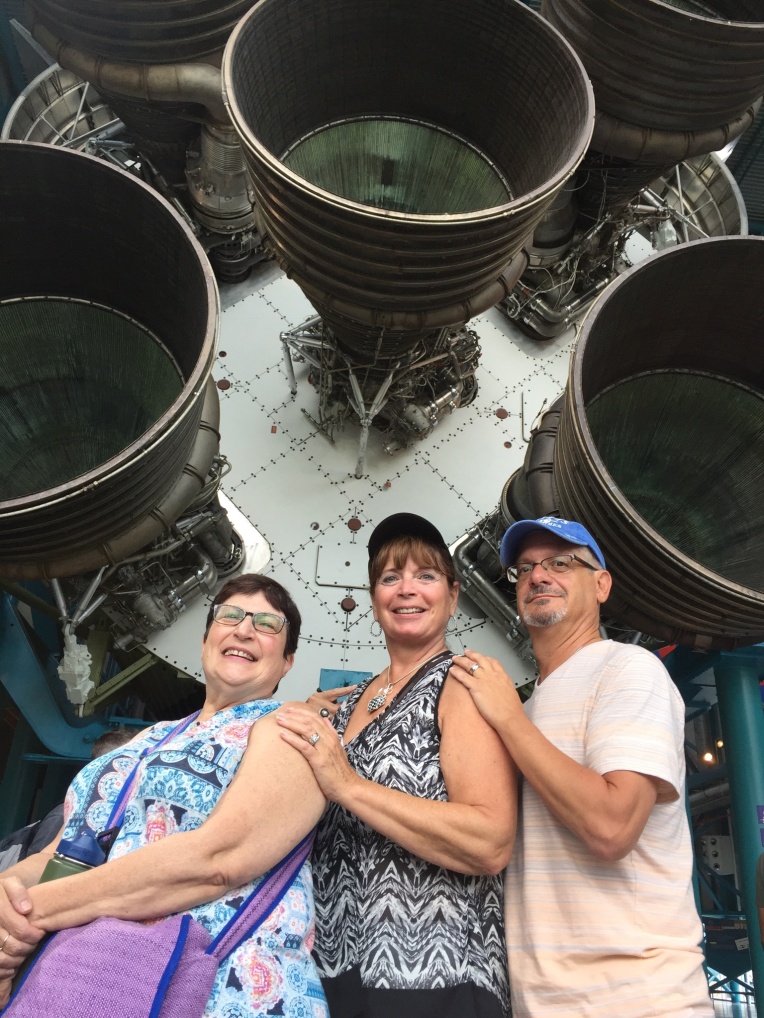 Do we look like we have the right stuff? Apollo 13 at the Kennedy Space Center. 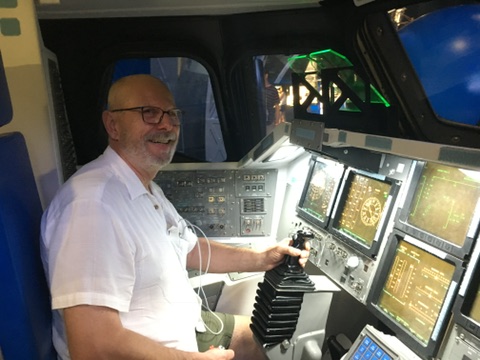 And now it’s time for me to stop writing and get on the plane! Next stop, Fort Lauderdale, and then on to Quito, Ecuador!